Our Classic Solitaire game automatically deals your cards to the tableau.

If you do not like a particular deal or are stuck on a game you can click the new button near the top center of the screen to deal another hand.

The game is timed, however the timer does not start until after you move your first card.

Your gameplay stats include your win loss ratio. If you get a new deal you do not like you can click on the new button to deal again without impacting your stats.

If you make a particular move you dislike click the undo button.

The top right corner of the game shows your current score. Left of the undo button is the time played on the hand.

This game has a menu available via a hamburger menu button in the upper left corner.

This menu offers the following features: restart new game, turn sound on or off, switch between turn 3 & turn 1 play, and your overall play statistics.

This game allows you to shuffle through the reserve pile an unlimited number of times. If you wanted to limit yourself to a set number of passes you can, just remember what pass number you are on.

Your gameplay statistics are stored in your web browser. Our website does not track your play in any way whatsoever.

In fact, this game is a progressive web app which will even work offline.

Game Design / How to Set Up Solitaire

There are hundreds of unique types of Solitaire, though if people refer to the word without any modifier or qualifier they typically mean the game which is also called Klondike Solitaire in the United States or Patience in the UK. The playing field is organized with 7 columns on the Tableau. The first having only one card and the rest having progressively one more card in each column until the seventh and final column has 7. This means 28 of the 52 cards are on the Tableau and the other 24 cards are left in the reserve or stock pile.

A picture of the game layout (which was created from our above game) is shown. 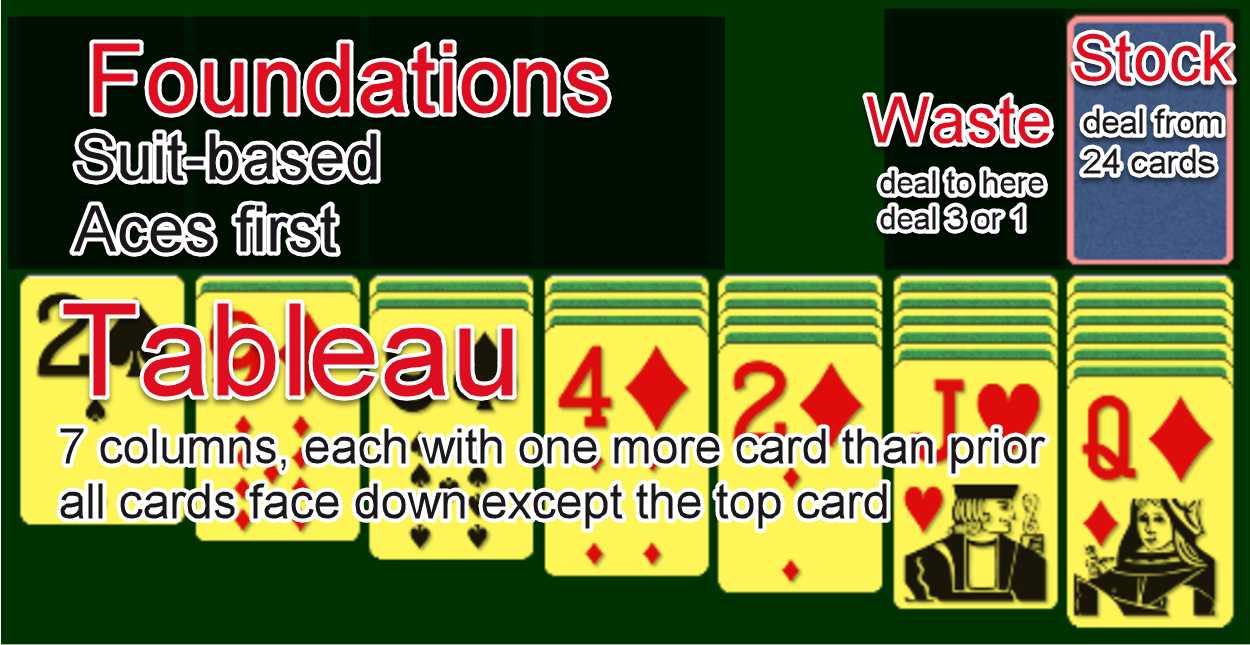 Note that this game penalizes removal of a card from the foundation if you physically remove the card, however your score remains unaffected (other than time!) if you instead use the undo button.

Switching Between Turn 3 and Turn 1

Playing in turn 3 mode is significantly harder than playing in turn 1 mode, as you only get a chance to lay 1 in 3 cards on each shuffle through the reserve.

In turn 1 when all cards on the tableau are face up the game autocompletes since there is nothing left to do but place the cards across to the foundation. Autocomplete has been turned off in turn 3 mode because how you lay cards to the foundations and use the remaining cards in the reserve impacts if the game is possible to beat.

Sometimes the card you need is in-between the third card shuffle and never ends atop the waste pile.

This game scores turn three and turn one games using the same point system. If you have recordbreaking speed and are stuck late in a turn three game, in the middle of a game you can switch it to turn one to get to that missing card.

Learn the Basics of Solitaire

So, none of your friends are up for a game? No problem!

Solitaire is an old school, challenging card game of concentration and skill that can be played alone. The most popular form of this game today is Classic Solitaire.

The History Of Solitaire

Solitaire emerged in the 1700s in northern Europe.

In Germany, Sweden, France and Russia there were references in literature to a game called “Patience”, the earliest recorded name for Solitaire. Although English, the word “patience” is of French origin and indicates that the game required a patient temperament in order to play it well.

By the mid-19th century, Solitaire was popular in French high society, whilst in England, Prince Albert was known to be an enthusiast. The game didn't make its way across the Atlantic to the USA until 1870 where it became known as Solitaire.

Solitaire grew in popularity amongst card players of all walks of life, but was given an immense boost following the advent of desktop computers. Microsoft Windows, a leading operating system, included a free version of Solitaire in 1990.

Many work hours were lost to this challenging game. Office workers the world over played the game, no doubt switching surreptitiously between active windows to hide their game playing from supervisors!

Fun fact. As the cards are laid out, you may notice a similarity to the way Fortune Tellers lay out their Tarot cards, revealing hidden secrets with each turn. An early version of Tarot emerged in Italy in the 1425. Solitaire was most likely influenced by fortune telling.

How To Play Classic Solitaire

The Classic Solitaire game space consists of these elements:

The Table is formed by seven piles of cards. The piles are built from left to right.

On the next deal,  one card is placed face up on the second pile, followed by five cards face down on the next five piles.

The deal continues until each pile has a single card placed face up.

The object of the game is place all cards, in order, onto the Ace foundations.

The Foundations are four piles. Each Foundation starts with an Ace, and builds towards a King. In Classic Solitaire, the foundations begin empty.

Arrange these Foundations stacks above the Table stacks.

Each Foundation will consist of one suit. One foundation for hearts, one for diamonds, one for spades and one for clubs.

Once a sequence of a suit is complete, it is removed from play.

The draw pile is the pile of remaining cards after all cards are dealt onto the Table. These cards can be drawn and brought into play.

These cards will be laid face up, below the table. This is also known as The Talon.

How To Move Cards

Once the board is set, the aim of the game is to move cards from the Table to the Foundations.

As you can only begin a Foundation with an Ace, if an Ace is available on the beginning board, they can be moved onto the Foundations.

Another example of play is if a three of hearts becomes available and a two of hearts is showing on a Foundation pile, you can move the card from the Table to the Foundation stack.

You're now one step closer to winning the game.

The goal of Classic Solitaire is to transfer all cards from the Table to the Foundation. The game will end if no moves are possible, or if all cards are cleared.

When one of the seven piles is gone, because all cards have been moved up onto a Foundation, only a King can be moved into the open space.

The top card of a Foundation pile can be moved back onto a Table space or pile, if necessary.

If there are no more moves that can be made, then the game is lost.

The rules of Classic Solitaire are:

Here's an example of a Classic Solitaire game being played:

The faster you complete the game, the better your “score”. This isn't important for the single player game as your aim is simply to clear the Table, however if you're playing against others in an online tournament, the fastest time is how the winner is decided.

Single player computer solitaire games often use a point system like this:

Give yourself options. Always turn over a card from the Draw pile before making a move. The more options you have, the better.

If an Ace comes up, always move it to a Foundation if possible. This will reveal more cards than if you were to leave it in place in the Table.

If you don't have a King, do not empty a pile. You won't be able to create a new one unless you have a King.

Alternate red and black to give yourself more options. For example, if you already have a red King on the Table and have the option of placing the second red King or a black King, go for the black King.

Aim to maintain suits. If you mix them up, you will limit your possibilities.

Most, but not all, games of Classic Solitaire are winnable. It is estimated that 79% of all possible games are winnable. If a game looks lost, don't beat yourself up! Accept the loss and start again.

What is the goal of the game?

The goal is to move a shuffled deck of cards into four Foundation stacks in ascending order from Ace to King. If you can do this, you win the game. If you're blocked from making a move, you lose.

You lose the game. Always try to keep your as many options open as you can. Maintaining options is the key to winning Solitaire.

What is the probability of winning?

While a player does not know where all cards are in advance, one can sort of emulate that to a high degree through extensive use of the undo button as needed.

Hoye's Rules of Games suggests without using any undo moves players should be able to win roughly 1 in 30 turn 3 games.

Classic Solitaire uses a standard 52 deck of playing cards. Many other Solitaire games use 2 or more decks.

What is the difference between turn 1 and turn 3?

Turn 3 is broadly considered the default version of Classic Solitaire. It has 3 cards at a time laid down from the reserve onto the waste pile. This means only 1 in 3 cards is playable off the start on each turn through the reserve. In turn 1 every single card can be laid, making it easier to beat the game.

The Ace is low in Classic Solitaire. The King is high.

What are alternative names for Solitaire?

There are hundreds of different names and versions of Solitaire.

Some variations are regional. In the US what is called Classic Solitaire is called Patience in the UK. Other variations are more than name, with significant differences in the game based on the number of decks used, how the cards are dealt, how cards can be organized on the tableau, how the reserves are used, and how foundations are built.

Whate are the most popular versions of solitaire?

The most popular versions of solitaire are the core 5 games:

Here is a full listing of other versions we offer:

As extensive as our collection is, we are still expanding it. A few other popular versions include:

While solitaire is primarily known as a card game, the use of the word has expanded to mean single player games. There are versions og games using tiles (mahjong) or pegs (resta um).

Do you offer any other fun online games?

Yes. We offer a collection of card games, mahjong tile games, hidden object games, and a bunch of other fun online games you can play directly in your web browser.

In addition to our collection of solitaire games we offer many other online card games.

Play a variety of hidden object games online for free.

Play free match 3 games which were inspired by the likes of Candy Crush and Zuma.