Click the yellow and golden play button in the lower right corner of the game's welcome screen. This will then load a proverb. Click once more anywhere on the screen to deal.

Our Algerian Patience Solitaire game automatically deals your cards to the Tableau. If you do not like a deal, or you are stuck on a game, you can click the restart button near the top right of the screen.

This game has two other buttons. Sound on or off and help. You move the cards by left-clicking on them and dragging.

This game uses two regulation 52-card decks. The playing field is organized with eight columns on the Tableau. Half of the Tableau columns contain one card while half contain two cards. The remaining 92 cards are dealt to in the following configuration:

You win by moving all cards to the Foundations.

If you've played traditional Classic Solitaire, and looking for more of a challenge, you might want to take a look at some of the variations.  One difficult and challenging variation, Algerian Patience Solitaire, is a unique and difficult solitaire game using two decks of cards. The object of the game is to build eight Foundations in sequence.

The History Of Algerian Patience Solitaire

Algerian Patience Solitaire is based on the variants Carthage and Tournament. Tournament was based on an older game La Nivernaise, and also borrowed from Marechal Saxe. The commonality is the use of two decks.

How To Play Algerian Patience Solitaire

Algerian Patience uses two decks of playing cards. The objective is to move all cards to the top eight foundations spots.

In the middle, the Tableau is laid out with eight cards, face-up. On these piles, you can go up and down in suit. A King and an Ace can be used to turn-around, which means you can place either a King or an Ace on top of each other.

Along the bottom, you have your deck. You can lay out six cards at once, face-up. Once you have no remaining playing cards left to be dealt from the deck then the last final deal will be dealt to the Tableau, not to the reserve stacks.

You can move cards back and forth between the Tableau piles. For example, if you have king down to eight of clubs in one stack and ace up to seven in another stack and you want to get rid of the six of clubs from the Tableau then you would move the seven on the eight and then put the six on the seven.

The aim is to get all the cards up to the Foundation spaces, in sequence and in suit. Once you do, you win the game.

If you're blocked, then you lose.

If you find that you often end up blocked, don't despair! Algerian Patience Solitaire is one of the more difficult versions of Solitaire and takes a lot of practice to master.

One of the best ways to have a leg up in this game early is to create an open column in the Tableau as soon as you possibly can. You can lay any card from any source in an empty column. This makes it easy to reverse the order of cards in other columns if you need to in order to add more cards to either end, or to move the stack to a Foundation.

Your first four deals from the draw go to the bottom stacks (while the final fifth deal goes to the Tableau), so if you do not have a good lay to the Tableau from the bottom reserves it is ok to leave a column open on the next deal to keep your options open.

If you get a streak of same suit cards on the Tableau and can choose which order ot place them in you generally want the card closest to one of your edges at the bottom of the stack, so it is easier to move the stack to a Foundation.

This game does not have an undo button. If you have multiple 5 of hearts showing you can pull and drag them to see what the next card under them is.

How do you deal? 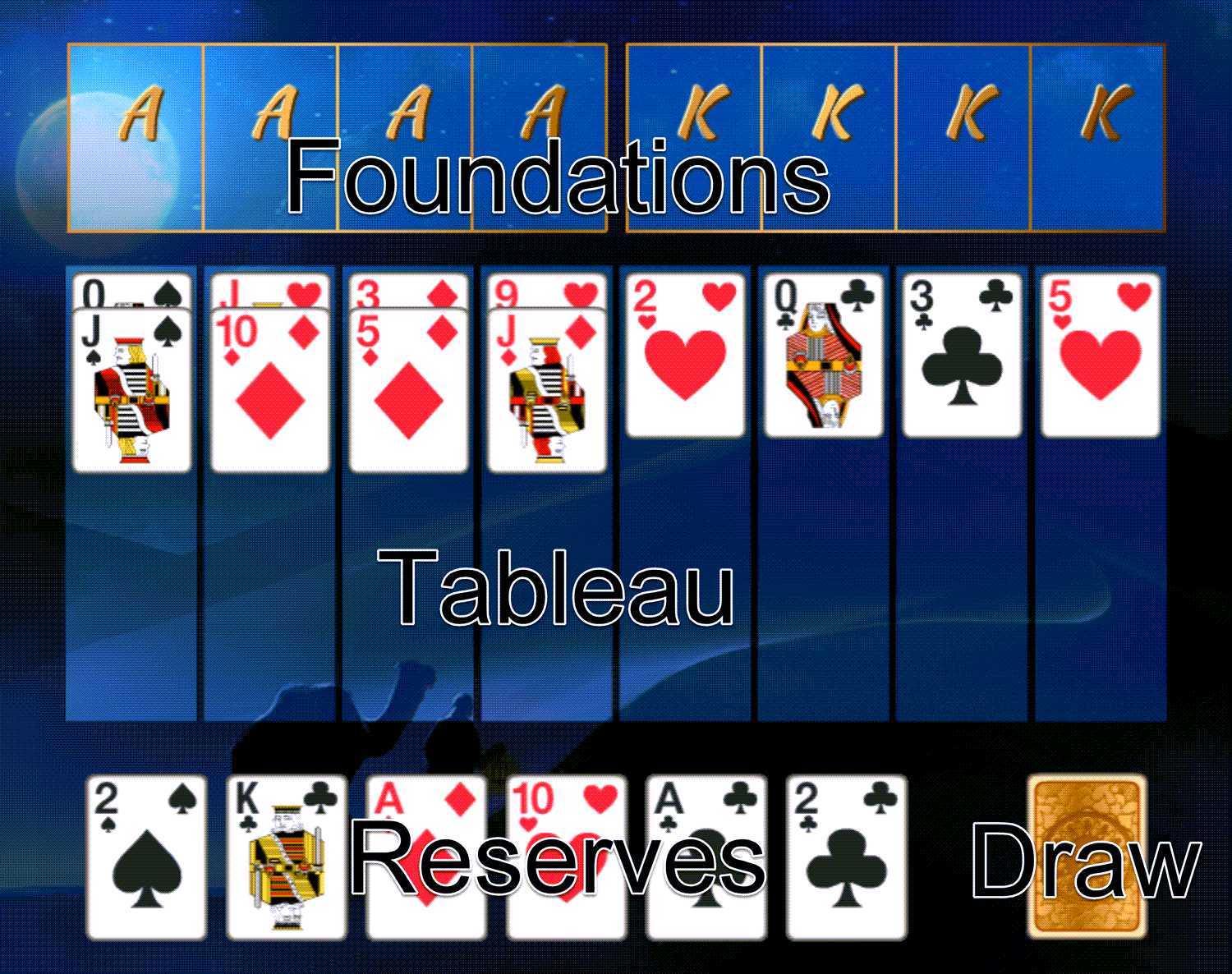 Computer versions will deal for you, but if you're playing with cards here is how you deal. At the bottom of the play space, deal six reserve stacks, containing six cards each.

Depending on what rule set you use, you can either leave the eight Foundation piles blank, or deal four Kings to the second four Foundation spaces. Dealing Kings to the foundation of course makes the game easier.

How do you move cards?

The top card in a pile can be moved. You need to place the cards in sequence. The sequence can run in ascending or descending order. You can also start moving in one direction then move back in another direction.

In the online game, if you try to make an illegal move, the computer won't allow you to place the card.

You can move cards:

You can not move cards:

What Are The Differences Between Algerian Patience Solitaire And Classic Solitaire?

The main differences are the use of two decks and the more complex layout of the gamespace. Algerian Patience Solitaire is arguably one of the more difficult versions of all Solitaire games.

The rules of Algerian Patience Solitaire are:

What are alternative versions of Algerian Patience Solitaire?

There are some close versions to Algerian Patience Solitaire, including: