Click the red and white play button inside of the above game to start a game. This will bring up the game type select mode. Turning 3 cards at a time from the stock pile is normal and turning 1 card at a time is easy. The cards will then be automatically dealt. The game is timed and the time starts as soon as the deal is done.

The game offers four control buttons in the upper right corner: restart game, how to play, turn sound on, and close game.

The game does not have a pause button, but if you click open the how to play menu (as indicated by [?]) it will pause the game until you exit out of the menu.

Some solitaire games allow you to double click a card to automatically lay it in another position. This game requires you to manually click and drag the card to place it where you want to.

This game also does not have an undo button, so be careful when moving cards.

Scoring is as follows:

The above offers specific information about the video game on this page. More background information on the card game itself is published below.

The Scoop on Klondike

Over the years, “Klondike” has mostly been dropped.

The most famous version of Klondike Solitaire is the Microsoft Windows version that came bundled with the operating system up until Windows Version 10.

What is Klondike Solitaire?

Klondike Solitaire is a challenging card game that can be played alone.

The History Of Klondike Solitaire

Solitaire, in its original form, emerged in the 1700s in Northern Europe.

“Patience” was the earliest recorded name for Solitaire. Although English, the word “patience” is of French origin and indicates that the game required a patient temperament in order to play it well. The game didn't make its way across the Atlantic to the USA and Canada until 1870 where it became known as Klondike Solitaire, then just “Solitaire”. Some people refer to it as “Klondike” or “Klondike Solitaire”, although this is mostly in the US and Canada, as opposed to Europe.

Fun fact: the minimum number of moves to win at Klondike Solitaire is 52. Every face up card moves straight to a Foundation without ever having to move a card anywhere else. The odds of dealing such a quick game are long, however!

How To Play Klondike Solitaire

You move cards around the gamespace following a set of rules. It's possible to follow all the rules and still get blocked if you lack strategy and some luck. Blocking yourself in means you lose the game.

How To Move Cards

You lay out seven cards in a row. All are face down except the first card. Then, you place an upturned card on top of the second card, then complete the row face down again. 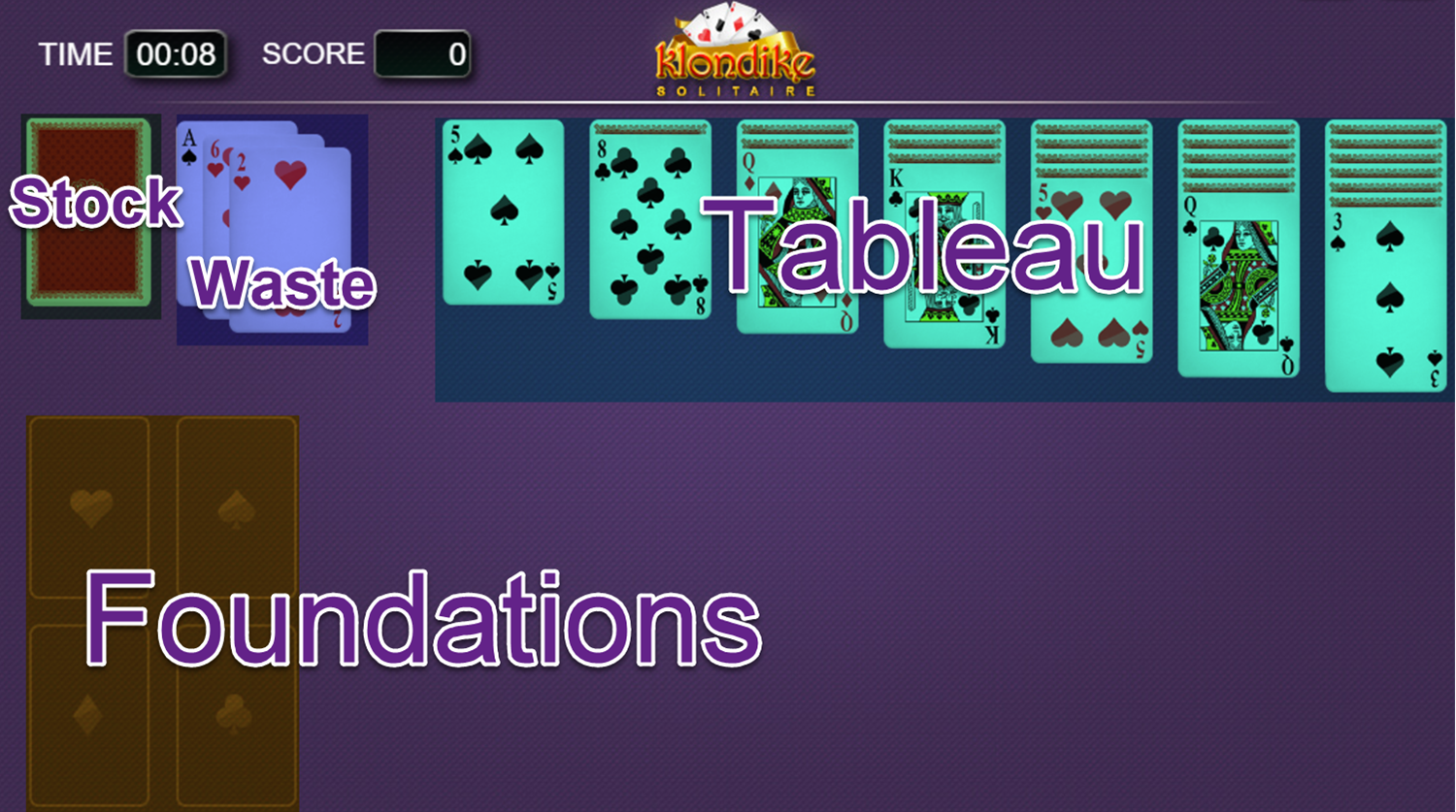 Move any aces up into one of four spaces near the row of seven. In the image above, they are placed to the left hand side. These are called Foundation piles, and are described in the next section. Every time you move a faceup card, you need to turn the face down card beneath it to show face up. The top card can then be moved.

If you use up all the cards in a pile, you can start another pile if you have a King. Otherwise, leave it blank until you do.

When there are no more moves, you can turn up a card from the waste pile.

For example, if there is a six of clubs and a five of clubs on different piles on the Table, you cannot move the five card to the six pile because they are the same colour. You can move a five of hearts onto a six of clubs, however.

Another example of play is if a three of hearts becomes available and a two of hearts is showing on a Foundation pile, you can move the card from the Table to the Foundation stack.

You're now one step closer to winning the game.

How To Setup The Klondike Solitaire Game Space

The Klondike Solitaire game space consists of these elements:

The Draw. A deck of 52 cards. These are shuffled into random order. Of course, the computer versions will shuffle the desks for you.

The Foundations. This is a place where piles of cards can be stacked in numerical order. This space is left empty at the start of the game. The beginning foundation card is the Ace of each suit upon which the rest of the cards are stacked, all the way up to the King of that suit.

A Table, or tableau. These are either empty spaces or feature cards that are temporarily stored before being added to a Foundation. These are governed by rules, which we'll get to shortly.

The Table is formed by seven piles of cards. The piles are built from left to right.

On the next deal,  one card is placed face up on the second pile, followed by five cards face down on the next five piles.

The deal continues until each pile has a single card placed face up.

The object of the game is place all cards, in order, onto the Ace foundations.

The Foundations are four piles. Each Foundation starts with an Ace, and builds towards a King. In Klondike Solitaire, the foundations begin empty.

Arrange these Foundations stacks above the Table stacks.

Each Foundation will consist of one suit. One foundation for hearts, one for diamonds, one for spades and one for clubs.

Once a sequence of a suit is complete, it is removed from play.

The Waste Pile is the pile of remaining cards after all cards are dealt onto the Table. These cards can be drawn and brought into play.

These cards are laid with the top card face up and commonly positioned below the Table.

How To Win Klondike Solitaire

The goal of Klondike Solitaire is to transfer all cards from the Table to the Foundation. The game will end if no moves are possible, or if all cards are cleared.

When one of the seven piles is gone, only a King can be moved into the open space.

The top card of a Foundation pile can be moved back onto a Table space or pile, if necessary.

When there are no more moves that can be made, then the game is lost.

The rules of Klondike Solitaire are:

The faster you complete the game, the better your “score”. This isn't important for the single player game as your aim is simply to clear the Table, however if you're playing against others in an online tournament, the fastest time is how the winner is decided.

In computer tournaments, each player is typically given decks in the same shuffled order so that each player must play the game from the same starting position.

Give yourself options. Always turn over a card from the Waste pile before making a move. The more options you have, the better.

If an Ace comes up, always move it to a Foundation if possible. This will reveal more cards than if you were to leave it in place in the Table.

If you don't have a King, do not empty a pile. You won't be able to create a new one unless you have a King.

Alternate red and black to give yourself more options. For example, if you already have a red King on the Table and have the option of placing the second red King or a black King, go for the black King.

Aim to maintain suits. If you mix them up, you will limit your possibilities.

Most, but not all, games of Klondike Solitaire are winnable. It is estimated that 79% of all possible games are winnable.

What is the goal of the game?

The goal is to move a shuffled deck of cards into four Foundation stacks in ascending order from Ace to King. If you can do this, you win the game. If you're blocked from making a move, you lose.

You lose the game. Always try to keep your as many options open as you can. Maintaining options is the key to winning Klondike Solitaire.

The Ace is low in Klondike Solitaire. The King is high.