The timer starts with the beginning of the deal and is at 5 seconds when the deal has finished.

Our Tripeaks Solitaire game automatically deals your cards to the Tableau. If you do not like a deal, or you are stuck on a game, you can click the restart button near the top right of the screen.

The playing field is organized into three pyramids, or “peaks”. There is a top row of three single cards (peaks of the pyramids) turned face-down, followed by a row of two cards, and so on, down to a final row of ten up-turned cards.

Players earn a time bonus for completing the game quickly. The time bonus starts off at 1,000 points and counts down a point each second. If you finished the game in a minute and 18 seconds then it would be 922 bonus points.

The time bonus is added to your row bonus and card removal score to create your total score.

The theoretical maximum score is 2,120, which is comprised of:

It is hard to score more than 2,060 points as doing so requires you clearing 28 cards off the board in under a minute, with 5 seconds used up by the initial deal.

The three peaks are in the centre. The draw is located under the peaks. The waste pile is to the left of the draw pile.

If you've played traditional Classic Solitaire, and looking to play one of the fun variations, you might want to take a look at Tripeaks Solitaire.

The object of the game is to clear all the cards from the three peaks. The game is played with one standard deck.

The History Of Tripeaks Solitaire

The Tripeaks variation was created by Robert Hogue in 1989. The game became widely popular after it was included in the Microsoft Solitaire Collection.

The defining feature of this version of the game is the three peaks layout. Eighteen cards are dealt face-down to form three “pyramids”. Each pyramid has six cards each with a row of ten cards beneath connecting the three pyramids at the base.

Place the first card from the stock in the waste pile. 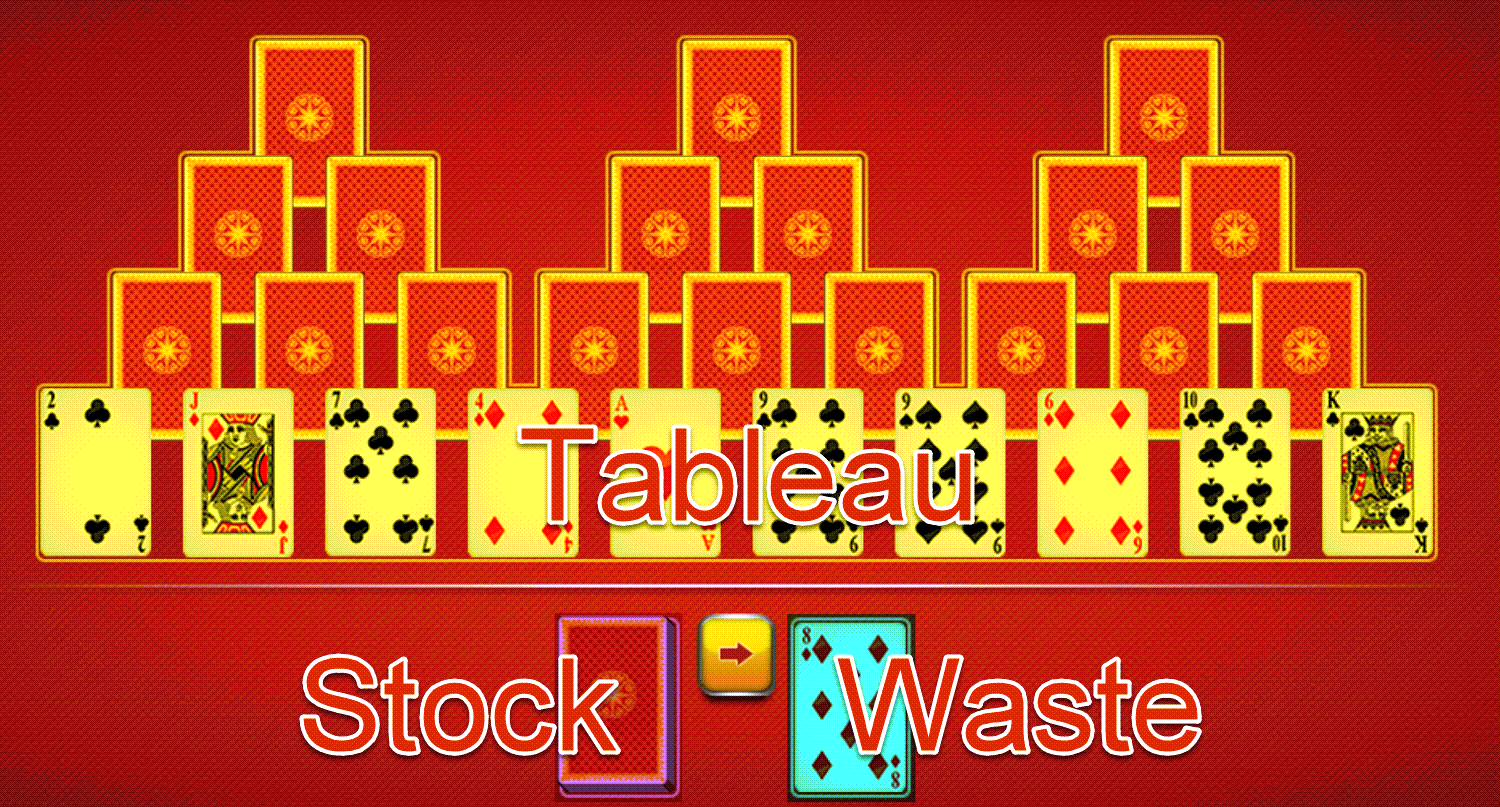 To move a card from the Table (also known as the Tableau, meaning the game space) to the waste pile, it must be a rank higher or lower sequentially, though suit does not matter. This card then becomes the new top card. This process is repeated until the sequence ends.

An Ace can be placed on a King, and a King can be played on an Ace.

Any face-down cards that are no longer overlapped by cards can be turned up. If no further card can be played onto the waste pile, a card is placed on the waste pile from the stock.

The rules of Tripeaks Solitaire are:

This doesn't apply to the online version, but you can use a scoring system in Tripeaks Solitaire. You get points for clearing each peak and by forming long sequences.

The second way to score is to form long sequences. A sequence is formed when you don't need to deal another card from the waste pile.

The first card you move earns one point, the next card earns two points, the next card earns three points and so on. The sequence ends when you deal from the waste pile at which point the sequence starts again. Due to the way the points keep adding, a long sequence is worth considerably more than a shorter sequence. For example, adding two cards extra on a twelve card sequence almost results in as many points as two six card sequences!

What happens to paired cards?

Paired cards are moved to a discard or waste pile.

How do you use the draw or deck pile?

What cards can be paired?

Only open cards can be paired. The rest should all be face down.

What happens when the draw pile is empty?

If no other cards can be matched, then the game is over.

How do you win?

When all cards are removed from the three peaks, the game is won.

What are alternative versions of Tripeaks Solitaire?

There are, however, different ways to play Tripeaks. You can play with a wild card which makes it easier to clear all three peaks. You can also start with an empty waste pile so that one of the exposed cards can be chosen to go to the waste pile.

Other interesting variations of Solitaire include: