Click the blue and white button on the game welcome screen to start your game. This will bring up a brief tutorial which you can scroll through using the left and right arrows on the screen, or you can click the play button again to start the game.

Our Pyramid Solitaire game automatically deals your cards to the Tableau. If you do not like a deal, or you are stuck on a game, you can click the restart button near the top right of the screen.

The timer on our game begins before the deal is complete and you can begin to make plays at 5 seconds.

The playing field is organized into a pyramid, with a row of one card, followed by a row of two cards, and so on, down to a final row of seven cards. The pyramid will consist of twenty eight cards in total, shown face-up. The 24 remaining cards are in the draw pile, from which you can move across 1 at a time into the waste pile.

The pyramid is in the center.

The draw or stock pile is located under the pyramid on the left side.

The waste pile is to the right of the draw. 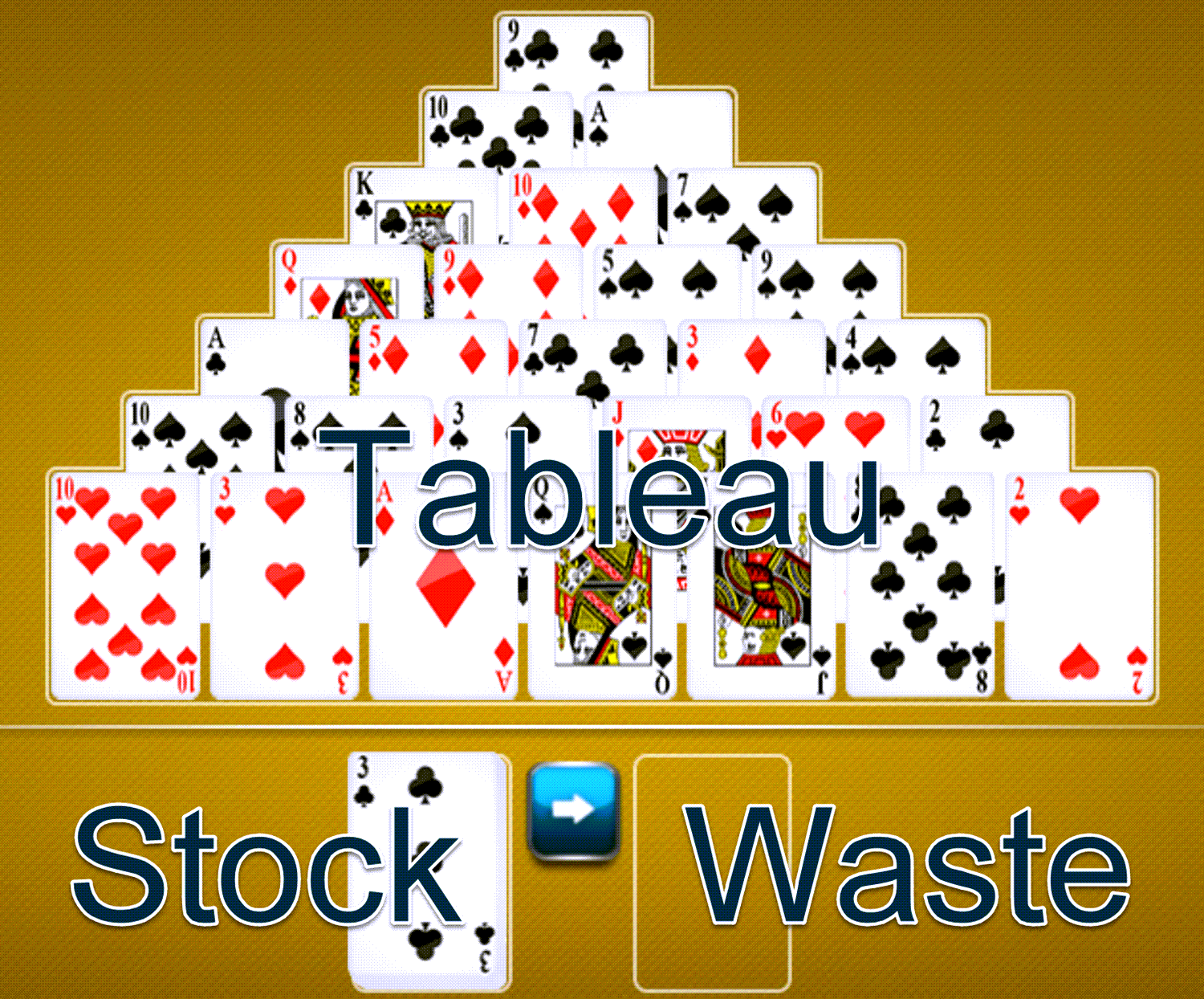 If you've played traditional Classic Solitaire, and looking to play one of the fun variations, you might want to take a look at Pyramid Solitaire.

Pyramid Solitaire  differs from Classic Solitaire in that the cards are arranged in a pyramid layout. The object of the game is to remove pairs of cards that add up to a total of thirteen from a pyramid arrangement of twenty eight cards.

The History Of Pyramid Solitaire

A variation of the game was released by Microsoft called Tut's Tomb. The cards were arranged as a pyramid, differing from Classic Solitaire where they are laid out in rows and columns.  The game is now more widely known as Pyramid Solitaire.

The defining feature of this version of the game is the pyramid layout.

Deal cards to form a pyramid, starting with a row of one card, followed by a row of two cards, and so on, down to a final row of seven cards. The pyramid will consist of twenty eight cards in total shown face-up. Each row should overlap the previous one.

The remaining cards are set down at the bottom of the pyramid. This is the draw pile. These cards are arranged face-down. There is also a waste pile for cards that are passed from the draw pile.

Pyramid Solitaire is “open” in that the cards are dealt face up at the start of the game.

The object of the game is to remove all cards from the pyramid. Cards are removed in pairs and these pairs must add up to thirteen. For example, a ten and a three can be removed together, as they add up to a total of thirteen.

The rules of Pyramid Solitaire  are:

Play Kings immediately. As a King needs no other match, you can remove it and free up other options.

Carefully consider your options. Sometimes, passing rather than making a match is the right thing to do, depending on what cards you need to free up.

Remove the pyramid evenly on both sides, if you can. If, towards the end of the game, you are five-deep you'll need to flip five specific cards in order to win.

Always give yourself the most options. For example, always choose to eliminate a card that exposes another card in the pyramid.

If a pyramid has three of the same cards – Queens, for instance – try not to play the fourth card from the draw pile. Try to play it from the pyramid. For example, if you have a Queen that needs matching, try to match it with one of the Aces in your pyramid rather than an Ace from the draw pile. This gives you more options later in the game.

What Values Do The Cards Have In Pyramid Solitaire?

What happens to paired cards?

Paired cards are moved to a discard pile.

How do you use the draw pile?

Cards can be turned over on the draw pile to use as potential matches. For example, you might have a ten card in the pyramid and you turn up a three. These two cards can be matched and removed from play.

What cards can be paired?

Only open cards can be paired. An open card is a card that doesn't have another card on top of it.

What happens if a draw pile card can't be matched?

The card is then moved to a waste pile. It is placed face up.

Keep drawing cards from the draw pile until you can make a match, or there are no cards left in the draw pile. You can replace the empty draw pile with the waste pile up to three times.

Can the waste pile card and draw pile card be matched?

Yes, they can. If they add up to thirteen, both cards can be matched.

The top card of the waste pile can also be paired with an open pyramid card.

Can you skip a move?

Yes. You don't have to make a match if you don't want to. You might do this if you need to clear another card that is more strategically important but you're currently blocked from doing so because it isn't open.

What happens when the draw pile is empty?

You can reset the draw pile by turning over the waste card pile and shifting it to the draw pile position. The waste pile now becomes the draw pile. You can only do this three times.

How do you win Pyramid Solitaire?

When all cards are removed from the pyramid, the game is won.

What are alternative versions of Pyramid Solitaire?

There are a few different versions of Pyramid Solitaire. Other names and versions include: