When you load this page a new game is automatically dealt.

Games are timed with a 20 minute limit & the coutdown clock at the bottom center of the game begins as soon as the deal is completed.

You can pause the game by opening up the help menu or clicking out of your browser.

Our Crescent Solitaire game automatically deals your cards to the Tableau. If you do not like a deal, or you are stuck on a game, you can click the reshuffle button on the bottom right. You are allowed three reshuffles per game.

The timer is located at the bottom of the screen. This game also offers hints on the bottom left. The menu at the top left and right allows you to save the game, restart the game and turn the sound on and off. Click the help button for game instructions.

The playing field is organized with sixteen piles of six cards each on the Tableau. There are eight foundation piles across the bottom where the Kings and Aces have already been laid to start the foundations. All the cards are dealt into play and up to 3 reshuffles of the Tableau are permitted. 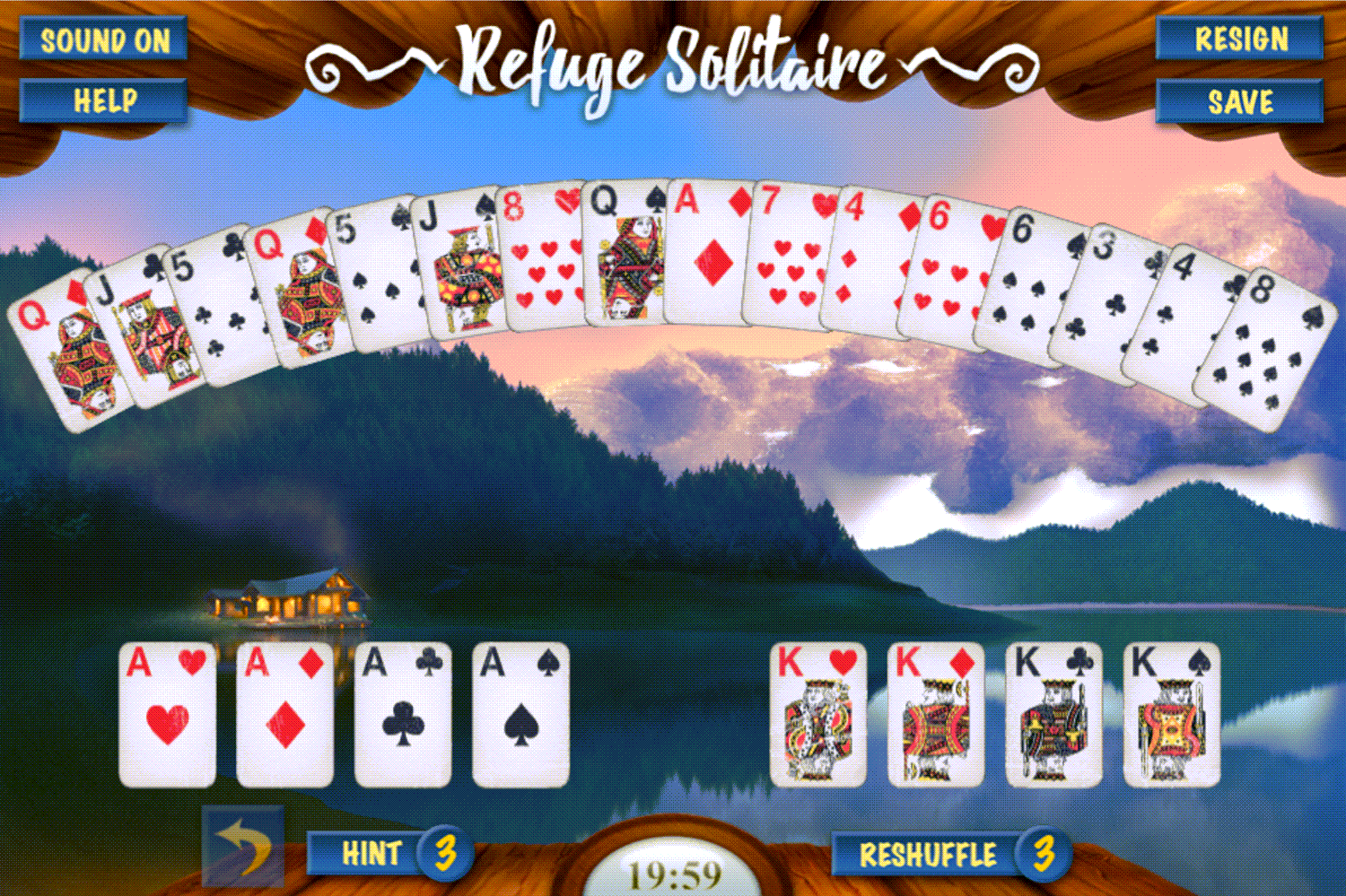 You can drag cards off the Tableau without laying them to see what the next card underneath it is.

This game also has an undo button on the left side bottom of the screen.

You win by clearing the Tableau cards onto the Foundation cards as quickly as possible.

If you exceed the 20 minute time limit the game is over.

We have an alternate verison of Crescent Solitaire which offers 4 timed levels and allows you to submit your high score to compete against other players.

If you've played traditional Classic Solitaire, and are looking for a different challenge, you might want to take a look at some of the variations.  One challenging variation, Crescent Solitaire, is a two-deck version of the game.

The History Of Crescent Solitaire

Solitaire, in its original form, emerged in the 1700s in northern Europe. The game didn't make its way across the Atlantic to the USA until 1870 where it became known as “Klondike Solitaire”, then just “Solitaire”.

Crescent Solitaire is a variation of La Belle Lucie, a classic patience game that was first published in the English language by Lady Adelaide Cadogan in 1870. It is one of the “fan” versions of the game, named because of the arc layout of the cards on the Tableau.

How To Play Crescent Solitaire

The goal of the game is to stack cards into sequences.

Stack the cards sequentially on the Foundations. Cards which cannot yet be stacked onto the Foundations can be placed in sequential order on other cards in the Tableau provided they are in the same suit.

There is no reserve in this game. All cards are in play. However, you are allowed three reshuffles, which move the bottom card from each of the 16 columns on the Tableau to the top.

How Do You Deal?

The computer will deal the cards for you, however if you're playing the card version of the game, arrange two sets of four cards. One set is the Aces, the other set is the Kings.

The rest of the cards are dealt in a “fan” shape. The fan is made up of sixteen cards with the remaining cards dealt on top forming sixteen piles of six cards each.

How Do You Move Cards?

The top card in a pile can be moved. It can be moved onto another card if it is in sequence. Click on the left mouse button to hold and drag a card to the desired position.

You can move cards within the Tableau. You can, of course, move them to the Foundations.

In the online game, if you try to make an illegal move, the computer won't allow you to place the card.

If you have an open column on the Tableau you can lay any other card there.

Cards can only be moved one at a time, but you can reverse the order of cards in a column by laying them in another open column. You can also move cards across foundations.

What Are The Differences Between Crescent Solitaire And Classic Solitaire?

In Classic Solitaire, you use a single deck. Players stack cards in descending order while alternating suit color on the Tableau and build four ascending suit-based foundations starting from the Ace and working up to the King.

In Crescent Solitaire, you use two decks. Players attempt to complete eight Foundations. The cards are all dealt out as opposed to using a deck from which to draw extra cards during game play.

Where did the Game Name Come From?

The game is laid out in the shape of a fan, resembling a crescent.

The rules of Crescent Solitaire are:

You lose the game. Always try to keep as many options open as you can. Maintaining options is the key to winning Crescent Solitaire.

The Ace and King foundations are laid automatically and the other 96 cards are laid on the Tableau in 16 columns of 6 cards each.

Can you move cards on top of other cards on the Tableau?

Yes, you can. You can do so in the Tableau, but you must match suit and the cards must be sequential in either direction,

Can you use empty columns on the Tableau?

Can you move cards across Foundations?

Yes. You can move cards from one foundation to the next in order to be able to pull more cards off the Tableau.

In fact, it is a good strategy and practice to not complete (and thus close out) a foundation until you are certain you would not need to lay across from one foundation to the other foundation of the same suit.

What are the chances of winning Crescent Solitaire?

You can dramatically improve these odds through the use of the undo button and by partially dragging a card without playing it to see what the next card underneath it is.

What are alternative versions of Crescent Solitaire?

There are many different names for Crescent Solitaire, but they are played in much the same way.  Here are some closely-related versions: