Our Mahjong Solitaire game automatically arranges your tiles onto the game space.

The playing field is organized with 144 tiles. Each of the 36 tile designs appears an average of 4 times, allowing you to make 2 pair of each. Some tiles may show fewer matches while other tiles show greater, but they will always be in even increments so pairs can be made.

If you do not like an arrangement or you are stuck on a game, you can click the shuffle or new game buttons on the right of the screen.

The number of pairs remaining and a timer are shown on the right, as are New Game, Shuffle, Undo and Options buttons. The Options button allows you to change the look of the game.

You can select to use tiles which are circus, symbols, wooden letters and numbers, or flowers.

You can also change the board arrangement from a wall to a heart, the default or classic turtle board layout, or a pyramid. 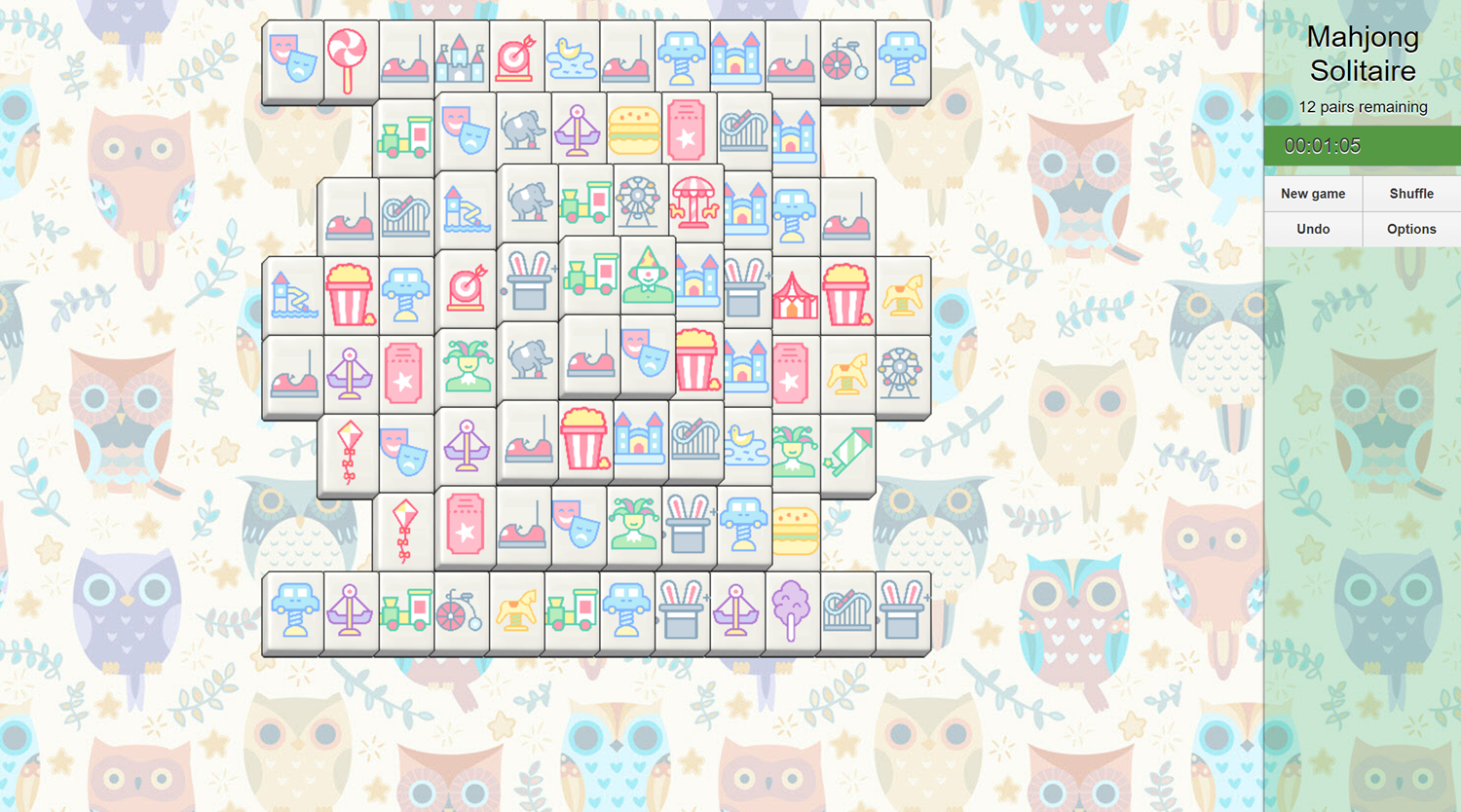 Try to complete the game as fast as possible to obtain the highest score.

Some games are coded to provide bonuses for making multiple moves in rapid succession. If you are playing one of those & your bonus time runs down to zero it can make sense to plan out multiple moves in a row before making your next move to ensure you capture bonus points.

A Beginner's Guide to Mahjong Solitaire

If you've played traditional Classic Solitaire, and looking to play one of the fun variations, you might want to take a look at Mahjong Solitaire.

The History Of Mahjong Solitaire

The computer game “Mahjong Solitaire” was originally created by Brodie Lockard in 1981. This was originally called “Mah-jongg”. Lockard claims that it was based on a Chinese game called “the Turtle”. The turtle in China is a symbol of longevity, strength and endurance.

Mahjong Solitaire became very successful with over 10 million copies being sold in the 80s, on a variety of platforms.

How To Play Mahjong Solitaire

Mahjong uses tiles as opposed to cards. The object of the game is to match pairs of tiles that have the same image. This will uncover more tiles beneath, which can then be paired.

Once all the tiles have been paired, the game has been won.

You lose the game if no more tiles can be moved.

In the computer game, of course, you can undo your previous move and keep playing until you do win. But, with a little practice, you shouldn't need this feature!

Mahjong is “closed” in that many tiles are hidden at the start of the game.

You must uncover tiles to progress.

How Do You Move Tiles?

You can move tiles if you can pair them. They are then removed from play. You can only pair tiles if there is no tile on top of them, or they aren't locked on two sides.

What Are The Differences Between Mahjong Solitaire And Mahjong?

Essentially, they are two different games. They both use the same symbols for the tiles, but otherwise, they share little in common.

Mahjong Solitaire is a one-player game that involves making pairs. You remove pairs to win the game.

Traditional Mahjong is more complex. It is typically played by four players and each player receives 13 tiles. The goal is to build a “winning hand” made of “melds”. Melds are sets of identical tiles.

Traditional Mahjong has perhaps more in common with the card game Rummy than it does Solitaire.

The rules of Mahjong Solitaire are:

Is Mahjong Solitaire an easy game to play?

At first glance, it looks simple. Just match free tiles. However, if you remove matched pairs without thinking a few moves ahead, you will soon run out of options and lose the game.

Here are a few strategy tips you can use.

Always think a few moves ahead. An obvious match may not be the best option to play. It depends what other tiles are available to you.

For example, look for four tiles that can be played at the same time. Remove these tiles. As there are no other matching tiles in the layout, removing them won't leave other tiles unplayable.

What about if only three tiles are visible?

Players should always pair the tiles that unlock the most possibilities. Stacks and rows are problematic areas in Mahjong Solitaire because your visibility and moves are limited. Look to break up these areas as soon as you can.

At the very least, try and unlock a tile with every move you make. This reduces the chances that you'll be left with no options later on.

You lose the game. Always try to keep as many options open as you can. Maintaining options is the key to winning.

How many tiles are used?

What Are the Chances of Winning?

All games are winnable. Unwinnable games are due to less optimal matches being made earlier on.

How many possible layouts are there?

There are 93,600 possible tile layouts for any given standard board. There are also thousandsof different board layouts, though most play is on a few widely use board types like those included in this game.

What are alternative versions of Mahjong Solitaire?

Other names and versions include:

Most versions of Mahjong Solitaire are fairly standard and most are played as computer versions. They tend to offer different graphical features on the tiles, such as animals and cartoon characters, but gameplay varies little.