Click the green play button in the bottom center of the screen.

If this is your first play the first level will also act as a tutorial.

Your web browser saves your level progress and gem storage. You can reset these in the settings menu with a gear on it in the upper left corner.

Click on the green play button on the game's welcome screen to start.

If this is your first time playing, the game will start at the first level and show you instructions. If you have played the game before, then your level completion progress, unlocked decks  and gem total will be stored and you can pick up where you left off.

The welcome screen has two buttons at the top and one at the bottom.

Bottom center stack of cards button: use your gems to unlock any of the five other different card backs.

If you've played traditional Classic Solitaire, and you're looking for a fun, simple alternative, you might want to take a look at Zero 21.  This fast and fun variation is great for beginners and children because you only need to count cards, rather than think about suits.

The History Of Zero 21

Zero 21 is one of the newer versions of Solitaire that uses some aspects of the traditional game, but places it in a more graphical, computer game format.

Levels rotate through a collection of divers Tableau layouts. 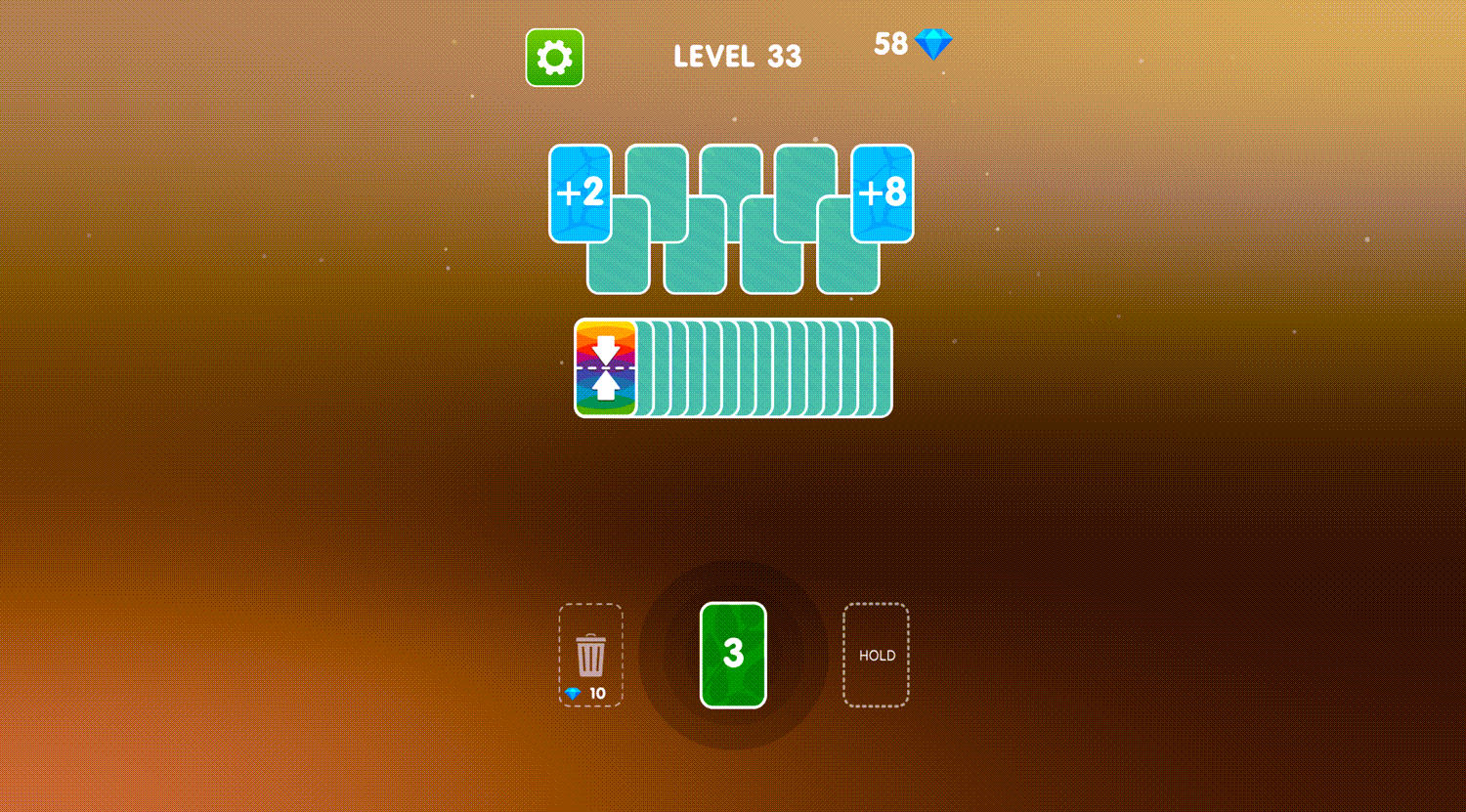 The aim of the game is to use up the entire card stack while ensuring your total doesn't go below 1 or above 20. Keep playing the cards, staying within this score range, until all cards are used up. You will then advance to the next round.

Each new level will present you with a unique stack configuration. Similar to traditional Solitaire, you will encounter card stacks where the top card must be used or played before you can play other cards hidden in the  stack.

You can place the card in different areas. For example, you can use the card immediately by placing it directly on the pile. Or you can temporarily store the card in the hold stack to the right of the active waste card pile.

You can also spend ten gems to discard the card. Each level you win pays you around seven gems. Unlocking new card deck designs costs one hundred gems.

When a level is complete, click on “Tap to Continue” to start the next level.

Alternatively you can click the home button to go back to the game welcome screen. You can also use the  card deck button to switch the design of the card backs or use gems to buy different card back designs.

Pass each level to progress to the next. Get rewarded with 8 gems as you pass each level. Gems can be used to discard an unwanted card at a cost of 10 gems per discard.

Work on multiple stacks in parallel.

If you deplete one stack fully while ignoring another stack of cards then you lose the option of being able to pull from either stack in order to keep the numbers in range. If you have two or more stacks remaining, it allows you to pull cards from a second or third option.

If a card has a relatively low absolute value and is the last card on a stack it makes sense to leave it while working on other stacks. Low values are less likely to move the game too far in either direction.

You want to stay close to 10. By keeping your total close to 10, you can play most other cards and still stay in range.

For example, if you had a value of 10 and had two cards available, “min” and “+9”. You would first lay the min, reducing the value to 1, then lay the +9, taking you back to a safe ten again.

Use the hold position when you are close to the boundaries and faced with large negative and positive value cards.

If you have a card in the hold pile, be sure to use it as soon as it is advantageous in order to open the space up for other cards. It makes a lot of sense to place the middle card – the card that moves you to a 10 value – into the hold position to save it for later. It is arguably the best card in the deck as it guarantees you can make at least one more play.

What are Alternative Versions of Solitaire?

Zero 21 is loosely based on Solitaire. There are many different versions of Solitaire including: