Click the play button in the center of the screen. This will automatically load a fresh game.

The game has a timer in it, though the timer does not start until after you make your first move. The timer appears below the playing field while a counter above the playing field tells you how many of the 32 pegs you have remaining.

Our Peg Solitaire game is based on the English version, which uses thirty three holes.  Peg Solitaire is also known as Sailor's Solitaire and is a single-player game where players try to remove all pegs except one from the center.

The timer is located at the bottom of the screen. There are also controls to pause, reset and restart the game in the upper left and upper right corners. 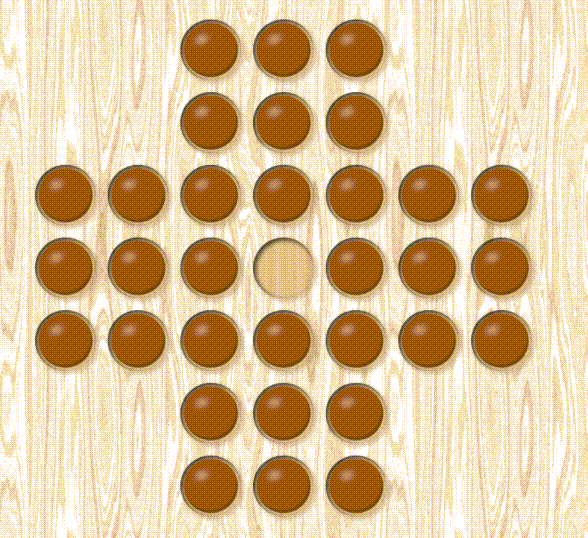 All pegs are placed, except for the center hole. Movements can be made horizontally and vertically, though not diagonally.

Legal moves require you to jump another peg and land in the subsequent hole on the other side of it. Legal moves will show a green border around the destination hole, whereas red borders indicate an illegal move which is disallowed. 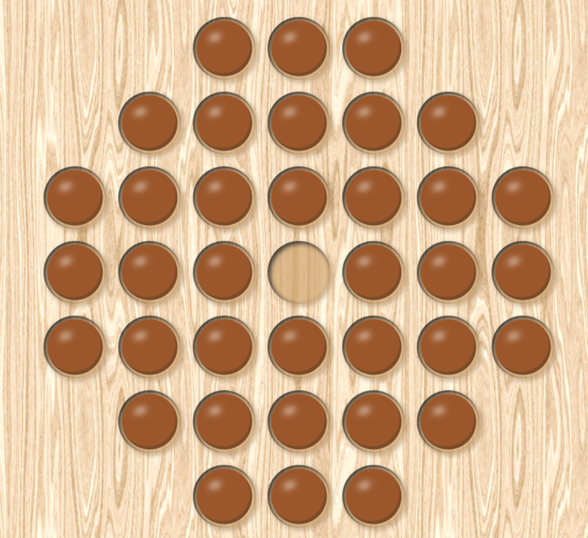 You win by clearing the board, except for leaving a single remaining peg.

If you've played traditional Classic Solitaire, and you're looking for a different challenge, you might want to take a look at some of the variations.

Peg solitaire is as different from traditional Solitaire as it gets! There aren't any cards in this version. Rather, this is a board game for one player involving the movement of pegs on a board.

Peg Solitaire fills an entire board with pegs, except for a central hole. The objective is to empty the rest of the board.

The History Of Peg Solitaire

Solitaire, in its best known card form, emerged in the 1700s in Northern Europe. The game didn't make its way across the Atlantic to the USA until 1870.

However, Peg Solitaire predates it.

This game can be traced back to the court of Louis XIV. In 1687, an edition of a French literary magazine featured the game and described in detail the board and the rules. Peg Solitaire fills an entire board with pegs, except for a central hole. The objective is to empty the rest of the board.

How To Play Peg Solitaire

Peg Solitaire is a game that consists of a board with thirty three holes, each filled with a peg, except for the center hole. It is similar to checkers in that the player jumps a peg over another into a vacant space. Any peg that is jumped over is removed.

A jump can be made vertically and horizontally but not diagonally. The goal is to keep jumping until there is only one peg remaining in the center.

For variation, you can choose a hole other than the center hole. Leave any of the other thirty three holes empty and aim to finish with a peg in that hole and leave the rest of the board clear.

The rules of Peg Solitaire are:

The maths reveals that some problems are indeed impossible, so consider your moves carefully. Like in card Solitaire, it is possible to get stuck.

You lose the game. Like in card-based Solitaire, consider each move carefully in order to avoid getting stuck.

How many holes are used in a Peg Solitaire board?

It depends on the version.

How many possible solutions are there?

What Are Strategies To Win Peg Solitaire?

Here's an easy to remember solution for the English version.

What are alternative versions of Peg Solitaire?

The most obvious variation is Chinese Checkers. Peg Solitaire is, of course, closer to the board game than it is to the card game.

“Stern-Halma” is a variation of the older American game Halma. It originated in Germany. The name “Chinese checkers” originated in the United States as a brand name in 1928, and the name has stuck.

Diamond Game is a variation played in South Korea and Japan. It uses the same rules as in Stern-Halma. The aim of the game is to enter all your  pieces into the star corner on the opposite side of the board, before opponents do the same. Each player has ten or fifteen pieces.

Alternate names for Peg Solitaire include Solo Noble, Hi-Q, Sailor's Solitaire, Resta Um, and Brainvita. As mentioned previously, the two most common variations of Peg Solitaire are European and English.