Our Freecell Solitaire game automatically deals your cards to the Tableau. If you do not like a deal, or you are stuck on a game, you can click the new deal button near the top center of the screen. This game allows you to shuffle through the reserve pile an unlimited number of times.

Your current score and number of moves is shown at the top left of the screen. This game has a control menu on the top right. Replay hand, help, turn sound on or off and restart game.

The playing field is organized with eight columns on the Tableau. All 52 cards are dealt into the game space.

A Beginner's Guide To Freecell Solitaire

If you’ve played traditional Classic Solitaire, and looking to play one of the fun variations, you might want to take a look at Freecell Solitaire.

In this article, we’ll look at:

The History Of Freecell Solitaire

Solitaire, in its original form, emerged in the 1700s in northern Europe and was widely known as “Patience”. The game didn’t make its way across the Atlantic to the USA until 1870 where it became known as “Klondike Solitaire”, then just “Solitaire”.

Freecell Solitaire is based on a 1968 version of Solitaire, called Eight Off. Eight Off then led to a variant called Bakers Off. In 1978, it was adapted for play on a computer. Instead of matching by suits, cards were matched by color, and thus Freecell was born.

Freecell has been included with every popular Windows Operating system since 1995.

How To Play Freecell Solitaire

“FreeCell” features four empty spaces, or cells, that are used for the temporary storage of cards. The FreeCells can be used to store single cards.

FreeCell is “open” in that the cards are dealt face up at the start of the game. This means that nearly every game can be won as players can plan their moves ahead.

How Do You Deal?

Use a standard deck of 52 cards. Start by placing the cards in eight piles. All of the cards should be face up. Four of the piles will have seven cards and the rest will have six.

These columns are called the “Tableau” or “Table”.

In computer versions of the game, this layout is created for you. 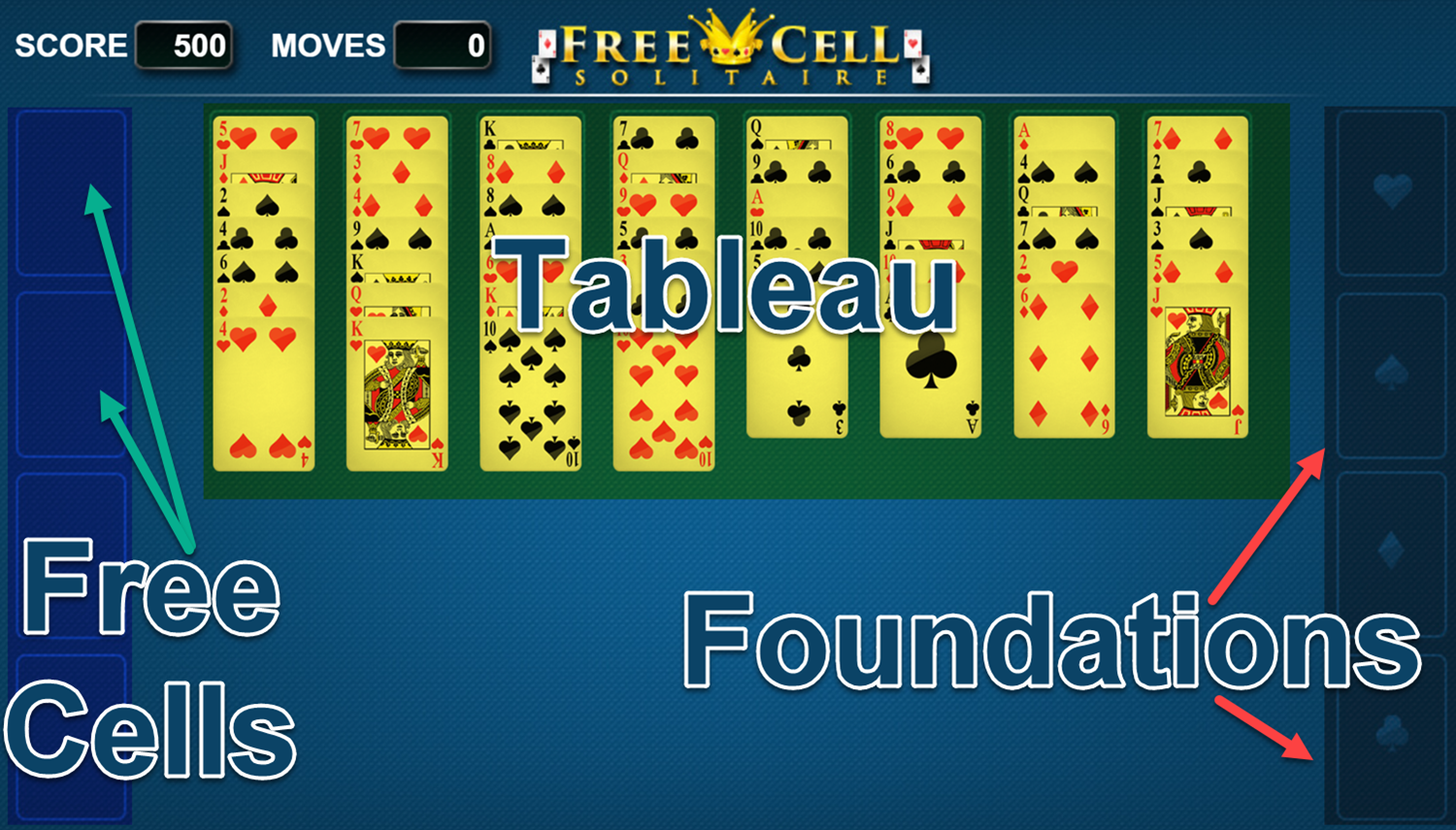 How Do You Move Cards?

Your goal is to build Foundation piles, one for each suit, from Ace to King.

What Are The Differences Between Freecell Solitaire And Classic Solitaire?

In Classic Solitaire your goal is to turn all cards face up. In Freecell, the cards are all showing.

Freecell adds “cells” as an option for moving cards. No other traditional version of Solitaire allows this.

Hoye's Rules of Games suggests without using any undo moves players should be able to win roughly 1 in 30 turn 3 Classic Solitaire games. Extensive use of the undo button or playing in turn 1 mode can dramatically lift the odds of winning to above 80%.

In Freecell, almost all games are winnable by players with a good skill level.

Why is it called Freecell Solitaire?

Freecell Solitaire adds “free cells” that allow players a further option for moving cards. These cells are in addition to Foundation piles, as seen in traditional Solitaire games.

How To Setup The Freecell Solitaire Game Space

The online version will set up the game-space for you. The Freecell Solitaire game space consists of these elements:

A Table, or Tableau. These are either empty spaces or feature cards that are temporarily stored before being discarded. Create eight columns of cards in these spaces, face up.

All 52 cards are used in the columns.

The Foundations. Spaces where you move the sequences of cards.

The Table Or Tableau

The Table is formed by eight piles of cards. The piles are built from left to right. After the deck has been shuffled, eight cards are dealt to each column, except the first four columns, which receive one more card than the rest.

The Foundations are the piles onto which you arrange the Table stacks.

The four cells which you can also use to hold cards.

The rules of Freecell Solitaire are:

The fewer moves, the better your score. This isn’t important for the single player game as your aim is simply to clear the Table, however if you’re playing against others in an online tournament, the least moves or fastest time is how the winner would be decided.

In computer tournaments, each player is typically given decks in the same shuffled order so that each player must play the game from the same starting position.

Freecell is a strategic game. Unlike other variations of Solitaire, most games are winnable if you play well.

Examine the Tableau carefully before making any moves. Plan your moves ahead.

Free up all the Aces, especially if they are buried behind the higher cards. Move them to the Foundation cells as early as possible.

Once all free cells are filled, you will have little room to manoeuvre. So use them wisely. Make sure you play any alternative options first.

Try to create empty columns. Empty columns are more valuable than free cells as each empty column can be used to store a sequence, as opposed to just a single card.

If possible, fill an empty column with a long descending sequence that begins with a King.

You lose the game. Always try to keep as many options open as you can. Maintaining options is the key to winning Freecell Solitaire.

The Ace is low in Freecell Solitaire. The King is high.

What Are the Chances Of Winning?

Almost all games of FreeCell Solitaire are winnable. Unwinnable games are only eight out of a million.

Aret there any alternative versions?

There are a few different versions of Freecell Solitaire. Other names and versions include: