Click the blue play button at the bottom center of the screen. This will bring up the difficulty select screen.

While hard mode is significantly harder than easy, the game scores the same way. If you want to switch between hard or easy mode after starting the game you have to click the blue X in the upper right corner then restart the game from the welcome screen & select the other difficulty level.

Hundreds of Free Games For Everyone to Play!

Our Golf Solitaire game automatically deals your cards to the Tableau, also known as the Table. If you do not like a deal, or you are stuck on a game, you can click the new deal button near the top right of the screen.

Your current time is shown at the top center of the screen. This game has a control menu on the top right: play instructions, re-start the game and quit the game.

Compete Against Other Players!

This game saves your high score on your local computer. We also offer multiple other versions of Golf Solitaire where you can submit your score to the high score board and see how well you rank among millions of players around the world!

The above games allow you to submit your high score.

The playing field is organized with seven columns on the Tableau. Thirty five cards are dealt with five in each column, with one additional card on the Talon and the remaining 16 cards in the draw pile. 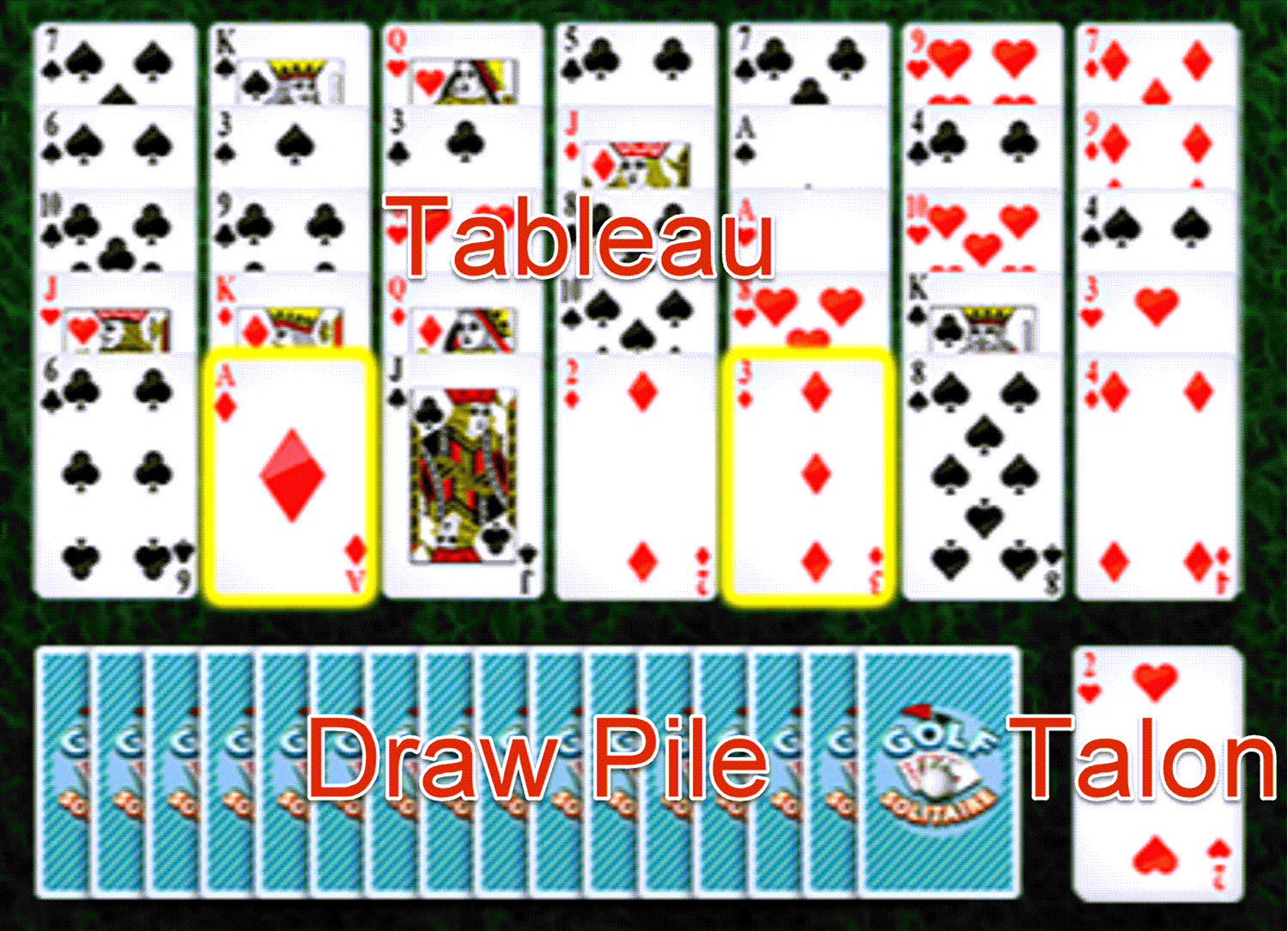 Suits aren't relevant in this version of the game. The face value of the card determines the next card in sequence. You can move the sequence in both directions at any time. For example, if the Talon showed a 5 you could lay a 4-3-2-3-4-5-6-7 sequence on it.

If you've played traditional Classic Solitaire, and you're looking for a different challenge, you might want to take a look at some of the variations.

One fun and fast-paced variation, Golf Solitaire, is a popular open version of the game.

The History Of Golf Solitaire

Golf Solitaire is an adaptation of Classic Solitaire and it is a great game for beginners. It's a fast game and easy to understand. It's very difficult to clear all the cards, however, so the aim for most games is to clear as many cards as you can.

Just like in real golf, a perfect score is seldom achieved.

How To Play Golf Solitaire

The game features seven rows of cards. Thirty-five cards are laid out in five columns, face-up.

The remaining cards are placed in a pile, or deck. The top card of the deck is placed face-up in a new pile, called a Talon. The object of the game is to get all cards into the Talon pile.

The game is won when all cards are moved to the Talon pile. If the player is stuck and can't make another move, the game is lost.

The rules of Golf Solitaire are:

In the conventional game, the aim is to get the lowest score. Online versions have different means to score, depending on the version.

You score one point for each card remaining in the Table after the stock or deck has run out. If the Table is cleared, you score a minus point for every card left in the stock.

In the offline version, there are some variations of rules allowed to make the game easier:

Carefully consider your options. For example, before you discard your last four, see how many fives and sixes you have. If there are fives but no sixes, you risk stranding the fives.

Try to discard from longer columns first. An empty column is useless, so don't discard the last card until you must.

Don't get discouraged if you find it difficult to win the game. You can expect to win a game of Golf solitaire approximately 1% of the time.  Also, there is only more than one possible around 25% of the time. Golf Solitaire is more a game of chance than it is a game of skill and just like real golf, there is a lot of luck involved!

You lose the game. If you are presented with options, carefully consider your move to reduce your chances of getting stuck.

Do Aces turn on Kings?

What are the chances of winning Golf Solitaire?

It;s almost impossible to get a perfect score and clear all the cards. Like real golf, you achieve a score based on “par” i.e. how close you get to the perfect score.

If you play on hard mode and always played any playable card from the longest column you would be expected to win about 0.8% of games, or 1 in 125 games played.

The game is based mostly on luck & how the cards are dealt, though around 25% of the time there will be 2 possible paths you can take & reading the upstream cards can help you improve your odds slightly from the 1:125 ratio.

Are there other similar alternative versions of Solitaire?

There are many different names for Golf Solitaire, but they are all played in pretty much the same way.